Do Replicants Dream of Bioengineered Sheep? 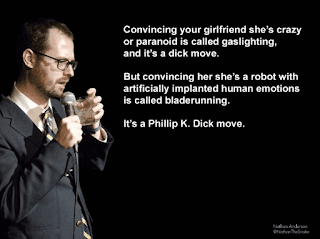 I went to see Blade Runner 2049 this week, and immediately thought of half a million things I wanted to say about it. I said the first of them on Facebook, but the rest was too long, so I put that here.

Edit: One Week Later: I forgot to mention something. I've long held that any film that begins with a bunch of explanatory text is inevitably crap. Blade Runner 2049 is the exception that proves the rule.

Short Form: It's a good film on almost any criteria, and I recommend seeing it.

It was eleven years ago to the day today that my life started unravelling. (Actually, it had been that way for some time, but I'd been oblivious to it.) That, too, was a Monday. Now that I feel that after a long, long decline, things may be starting to look up consistently, maybe it's time to put some of this stuff down here. It will cast a little light on why this blog has been slightly short on updates in the past two years or so.

I spent more than seventeen years with my first girlfriend. We were deliriously in love for a long time, and mostly happy all the way through, and desperately tried to make it work to the bitter end. Had we been willing to face it, it could have ended on that June evening in 2002. She came in and told me she'd been having an affair for nearly a year. It certainly explained the odd behaviour, the unexplained absences, the times when she'd come home crying without giving a reason. I was shocked, but in my shock I resolved to tough it out and not make hasty decisions. Neither of us were willing to throw away the good we'd had.

Conspiracies for the Hard of Thinking

I know, I've been quiet lately (as in, for nearly two years now). There is a reason, and I'll blog about that too in due time (the details are still a bit painful). Right now, I'll just tackle the issue that made me take up the blog again: right-wing lunacy in my native Finland.

The facts as they are known at this point: some people wrote a book covering the activities of Finnish right-wing extremists. At the book's release, a bunch of people showed up armed with (mostly) improvised weaponry. Security turned most of them away but not before one attending person was knifed in the back, fortunately not fatally. (To be fair, police inquiry turned up some weapons on the defending side as well: trouble had been anticipated.)

Now, this in itself is reprehensible and wrong. Getting a knife in the ribs is something that should never happen in a civilised society, and if anything, book releases ought to be specially protected, simply in the interests of freedom of speech. Not to mention that this was a political book, raising the question if the violence was also politically motivated.

But the immediately ensuing discussion was where it started getting weird.

There Are Nazis on the Moon

There may or may not be an ulterior motive to my posting this... but let's be honest: what's not to like about a film featuring Nazis on the Moon? Coming to a theatre near you in less than a year. Watch the skies!

Monsters Under the Bed

I'll post soonish about the reason for my extended absence from blogging. In the meantime, I'm posting my favourite Calvin & Hobbes strip (one of them, at any rate), if for no other reason then so that I'll always know where I can find it.

And with that leap begins the most exciting interactive entertainment experience I've had the pleasure of encountering lately: Canabalt.

Email ThisBlogThis!Share to TwitterShare to FacebookShare to Pinterest
Filed under flash

The Artist in the Family

You, my legions of faithful (if quiet) followers, have undoubtedly wondered with mounting anxiety why there have been no posts in this blog for a while. There's no dramatic reason; I've simply felt a bit under the weather lately. Luckily, there's always the family to remind you of reasons to write more.

My brother does software art. Actually, he's quite adept with various sorts of artistic skills, but his most ambitious works tend to be computerised ones. Currently, he's working on what can very well be described as "multimedia" (and not a single hyperlink in sight!), called Swarm. He graciously put a short sample online: here it is.

Swarm - One Minute Sample from Jussi M. Hukkanen on Vimeo.

As I understand, this is to be his artist's studies thesis. In case you can't tell, we're both lifelong aficionados of this "retro" thing that's very much in vogue today.

His earlier accomplishments include some highly efficient and modifiable code to create ASCII art (my favourite is a picture of his cat composed of the letters of a "typewritten" story). Even his charcoal works are sometimes based on computer-generated landscapes. Check it all out on his homepage (actually, the homepage of him and his partner, who's a talented artist in her own right and has a very personal style of her own).